It’s a very long way from Seoul, South Korea to Pasadena, California. Kathy Cho made that long journey back in 1979. Today, golf is experiencing an explosion of popularity throughout Asia and especially in Korea. But when Kathy was growing up, almost no one in her country played the game.

After she came to the United States, Kathy worked in the fashion industry. She continued her active life style in America, even enjoying English style horseback riding. Kathy heard of golf and was interested to learn about it. She found a place called the Western Golf College & Driving Range. This tiny, little indoor range, only 20 yards in length, is where Kathy first learned to swing a golf club.

From there, she went on to play little pitch and putt courses like Verdugo Hills, learning more about the game bit by bit. She got a set of blue Lynx golf clubs and a pink golf bag, which she loved. Later, as the bite of the golf bug took hold, she became a once-a-week player. Over time, Kathy got more serious about golf and joined the Women’s Club at Brookside Golf Course here in Pasadena. She began coming to Brookside at 5:30 in the morning with a shag-bag full of practice balls. With hundreds of hours of hard work, Kathy built her game up from nothing and whittled her handicap down all the way down to 4.6. Kathy had become a realplayer and played so well that she went on to become Brookside’s E.O. Nay Course Club Champion three times.

In a very short time, Kathy had come a long way in golf, but she still had more to accomplish. She decided to become a PGA teaching professional. Not everyone supported her dream. Someone even told her she would be better off opening a coffee and snack shop, but Kathy wasn’t discouraged.

To become a PGA professional requires a significant devotion to golf. Kathy became an assistant professional at Brookside and was educated in all aspects of the golf industry, including instruction. One of the final hurdles to overcome was the Playing Ability Test, sometimes called the PAT. Kathy struggled the first two times she played the PAT. When the time came to tee it up in her third PAT, she said a simple prayer, “Give me a chance.” 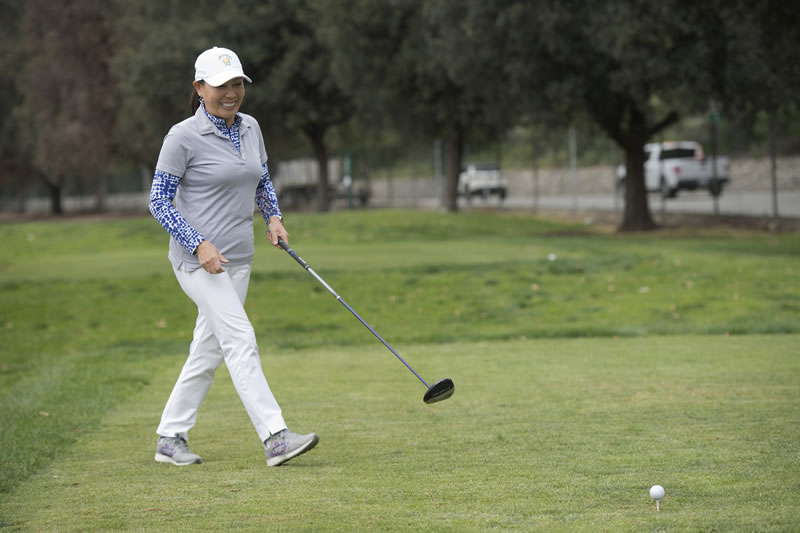 Today, there’s no mystery about how Kathy did in her final PAT. She is now a PGA and LPGA Class A Professional. When Kathy accomplished her goal of attaining Class A PGA and LPGA professional status, her two daughters were really proud of their mother. They always prayed for her when she took the various tests that were required by the PGA and LGPA. They encouraged her by always telling her she could do it!Kathy remembers those words of encouragement were always so helpful. In return, Kathy has tried hard to show her daughters to always work diligently and never give up on their dreams.

Since 2003 Kathy has been teaching children and adults the game she loves. She likes teaching golf to both kids and adults but especially enjoys teaching children. “Kids are always happy simply to be hitting the ball,” Kathy says. “I like to teach golf from the hole to the tee and from the short shots to the long shots.”

Playing lessons are an especially important part of Kathy’s teaching philosophy. “Playing lessons give kids a chance to explore the golf course,” Kathy says. “When I give a playing lesson I let my students play organic golf.” Organic golf is Kathy’s phrase to indicate that no comments or corrections about swing mechanics or technique are given during a playing lesson.

It’s simply golf for the joy of golf.

Kathy Cho sees herself as an ambassador for golf. She’s proud to say that her job is to make more golfers and to keep them coming back. This book is an extension of that mission. Kathy wants all her students, both those who come to work with her at Brookside and those who read this book, to know that everything she’s accomplished in golf, they can accomplish, too.

Make golf game interesting when you teach children! Most of kids are visual and creative!
Stack up 2 golf balls like a snowman, hit down below the ball and you will see fun result!
It will take time to put two balls up. Needs eyes, hand coordinations and patience! ... See MoreSee Less

Another fun playing lesson on golf course with 3 students!
Spend 4 1/2 hours together, they had fun and enjoyed the game!
Golf is fun activity, specially you play few hours with your friends! ... See MoreSee Less

Played golf at Conestoga golf club, in Mesquite, Nevada today!
Golf magazine has rated Conestoga as one of the top 5 golf courses in Nevada. Larry and I enjoyed the dramatic beauty the courses! It is stunning layout using the natural landscape’s unique characteristics, rocks and waters. We had beautiful golfing experience and a true test of every club in our bag. ... See MoreSee Less

Scroll back to top